You are using an outdated browser. Please upgrade your browser to improve your experience.
by A.T. Faust III
June 29, 2011
Bob X. Cringely, the long-time tech writer, recently took an afternoon to visit the outskirts of Apple's massive data center as his family traveled from the Carolinas back west. From his brief, midday sojourn, Cringely concluded the following:

[T]he giant Apple facility is mainly empty. It’s a huge building filled more or less with nothing and why Apple built it that way frankly escapes me. Maybe it’s just a shot across the bow of Google and its $650 million data center in South Carolina.

After a series of calculations designed to address the seeming disparity between necessary space and available space at Apple's facility, Cringely ends up comparing the data center to Google's similar (and nearby) installation:

Google is continually indexing the whole darned Internet, runs the biggest e-mail service, and many other services, not to mention all those ads. You can see how Google would require lots of data storage and servers to handle it. By now Google must have over a million servers and a very elegant way to manage them. But even Google’s million servers would require only 13.9 percent of Apple’s data center capacity. So what is Apple doing with such a big building? I can’t imagine a workload that would need even a tenth of that data center... So here’s my guess: I think it’s a joke. The building is a near-empty facility built primarily to intimidate Apple competitors. And so far it seems to be working.

While the idea of such an elaborate corporate bluff seems ironically romantic, there's not a chance it's true. Instead, a quick perusal of the responses to Cringely's post shows that, sometimes, even the best of us industry nerds can be technologically shortsighted. For starters, Cringely bases his calculations on a few erroneous figures, primarily his assessment of Apple's facility as a one million square-foot building. In reality, it's only half that size, doubling the aforesaid Google effort and comprising a lot some 265,000 square feet fewer than Verizon's Miami-based Terremark data center. Facebook is currently planning a 300,000 square-foot center, too, so it's easy to see there's nothing tremendously unusual about Apple's physical iCloud host. Additionally, Cringely uses an outdated industry metric for server installation, citing some six square feet needed per rack. Modern server and storage housing calls for upwards of five times that amount of "elbow room." As to the actual expected data quantities to be handled by Apple's new digs, Cringely somehow puts the figure squarely at 3.29 petabytes. He does this, surprisingly, by considering the existence of roughly 700,000 movies (as listed by IMDB) using 4.7 GB each. Of course, modern high-definition video requires much more disk space; and, since Apple hasn't even announced a video-streaming service (and because iTunes doesn't have anywhere near that number of movies), the reference seems wholly out of place. Curiously, Cringely doesn't factor in television shows, music, books, apps, photos, or any other manners of media in his math. Most importantly in all this, though, is that Cringely is forgetting the stated and expected scope of Apple's iCloud rollout. Redundancy, OS distribution, automatic wireless backups, and the wholesale reassignment of iTunes to the data center promises to require massive and ever-increasing amounts of storage. And don't forget Apple's alternative energy exercises, many of which may be partially or totally managed on-site. In short, Apple's North Carolina data center is extra large and cutting edge, but it's definitely not too big for its britches. And I'll bet it's not the last one Apple's going to have to build, either. 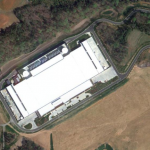 Apple's Mammoth Data Center Has Some Analysts Scratching Their Heads

Apple's Mammoth Data Center Has Some Analysts Scratching Their Heads
Nothing found :(
Try something else