You are using an outdated browser. Please upgrade your browser to improve your experience.
by DM
June 25, 2011
Almost exactly four years after the launch of the original iPhone, Apple has just been awarded a patent that could prove devastating to Samsung, HTC and other smartphone manufacturers. In fact, it could seriously shake up the industry. The patent covers a range of functionality relating to the multitouch display, including, specifically, the ability to scroll a frame-within-a-frame by using two fingers instead of one. Essentially, the patent discusses a method of moving a main window using one finger, and moving a secondary (internal) frame by using a second finger. What, you didn’t know the iPad could do that? Don’t worry, a lot of people don’t! ThisIsMyNext has a great video demonstrating the feature : There’s a lot of misinformation about this patent, with a lot of claims flying that this could force Samsung out of business or some other nonsense. Keep in mind, the patent isn’t as big of a deal as many are suggesting, it won’t let Apple issue cease and desist letters to all the smartphone manufacturers in North America, for example. But, it certainly means that Apple could extract some hefty licensing fees from many of the Android hardware partners. More importantly, it's a sign that Steve Jobs was serious about "vigorously defend[ing] the iPhone intellectual property." I don’t have an Android device around to test on, but doesn’t Android use this same method for scrolling maps embedded in a webpage? If so, it looks like there’ll be some nice royalties coming Apple’s way. 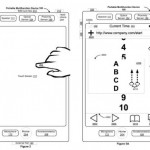 Apple's Scroll Patent: Good, But Not A Game-Changer

Apple's Scroll Patent: Good, But Not A Game-Changer
Nothing found :(
Try something else