You are using an outdated browser. Please upgrade your browser to improve your experience.
by Bryan M. Wolfe
June 14, 2011
Eight months after their much-publicized debut on iTunes, The Beatles have released their 1990s era Anthology albums and box set. First published beginning in 1995, “Anthology 1,” “Anthology 2,” and “Anthology 3,” features rarities, outtakes, and live performances from the band from Liverpool recorded from 1958-1970. Each Anthology album (originally sold with three CDs each) is priced at $29.99 in iTunes. Each includes iTunes LP featuring photos and more. The entire box set is priced at $79.99. In total, the albums contain 155 tracks. A separate "Anthology Highlights" album is also available for $12.99 featuring 23-tracks. Originally formed in 1960, The Beatles featured Paul McCartney, Ringo Starr, and the late John Lennon and George Harrison. The band broke up in 1970. The Beatles' original set of albums finally came to iTunes in November, followed by the release of their LOVE album in February. 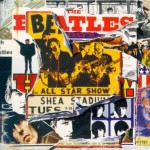 The Beatles Anthology Now Available In iTunes
Nothing found :(
Try something else