You are using an outdated browser. Please upgrade your browser to improve your experience.
by Bryan M. Wolfe
June 25, 2011
Skype is coming for the iPad 2 and we’ve got the video and confirmation to prove it. Apparently someone accidently posted a video showing Skype for iPad onto the company’s official YouTube.com page. While the video was quickly pulled down, RazorianFly re-uploaded it. Soon after, others got onboard the “Skype is coming to iPad 2” express too including 9 To 5 Mac and TUAW. It was only after TUAW confirmed with Skype VP of Consumer and Product Design Rick Osterloh that the video was genuine that we decided to post the video too. Take a look: According to TUAW:

Osterloh says that the iPhone version of Skype burst out of the gate quickly, with a big launch and "a userbase that doubled in just a month's time." And he said the iPad version should "have a similar success," especially since it's basically the same in functionality: chatting, audio and video calling, and all of the other standard actions you can expect from Skype. The current app has been in testing for a few months now, and Osterloh is excited to unleash it on the public. 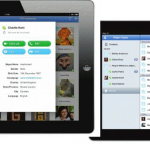 Confirmed: Skype For iPad 2 Coming [Video]
Nothing found :(
Try something else