You are using an outdated browser. Please upgrade your browser to improve your experience.
by A.T. Faust III
June 16, 2011
Earlier today, Joe shared with you the news out of TechCrunch that Facebook is prepping a new photo-centric iPhone app for release. Today, MG Siegler's followed everything up with a more detailed post, which includes tons of pictures and a bit of back-story on the project in general. Basically, Facebook's built an app that, though polished and pretty clean already, is still very much a work in progress. And, says Siegler, while its app is a seeming amalgam of several existing services (Instagram, Color, Path, and With, et al.) comprising a slew of features (geo-tagging, comments, "likes," multi-user albums, face-tagging, photo filters, etc.), Facebook doesn't seem quite sure of the project's ultimate delivery method:

[S]ome images make it seem as if the service will eventually reside within the existing Facebook iPhone app, while others seem to showcase an entirely new app (or a completely redesigned Facebook app). It’s entirely possible that both will be correct. It would make a lot of sense for Facebook, which is by far the largest photo service on the Internet with close to 100 billion photos, to make their own dedicated photo app.

Furthermore, it seems that the app -- which is internally referenced as "Hovertown" or "WithPeople" -- is built using much of m.facebook.com's new HTML5 backbone. Because of this, Siegler makes the (probably accurate) assumption that

Facebook likely wants to make an app that is as portable as possible. That is, while it may be built first for iOS, it can easily be ported to Android and other platforms with the HTML5 elements in place.

For more of Siegler's insights -- and to check out TechCrunch's full gallery of leaked app images -- check out his aforementioned post. 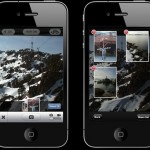 Facebook's Specialized Photo-Sharing App Gets Covert Preview, Made For More Than Just iOS

Facebook's Specialized Photo-Sharing App Gets Covert Preview, Made For More Than Just iOS
Nothing found :(
Try something else