You are using an outdated browser. Please upgrade your browser to improve your experience.
by Bryan M. Wolfe
June 7, 2011

The founder of Instapaper has released a statement concerning his company’s further viability following Mobile Safari’s introduction of Reading Lists later this year. Marco Arment explains he provides a “dedicated, deluxe app and service to serve (user's) needs better.” Arment made the comments on his personal blog.

Instapaper, which allows users to save webpages for future reading, is a terrific service. Available both as a web service and iOS app, Instapaper has a loyal, but small following. The universal Instapaper app costs $4.99. The service is also available in various apps for both the iPhone and iPad. With Mobile Safari in iOS 5, Apple will offer a similar service called Reading List for iDevice owners for free. Arment admits Apple’s entry will “show a much larger percentage of iOS-device owners that saving web pages to read later is a useful workflow and can dramatically improve the way they read.” However, he sees that as an opportunity for his product. He states:

If Reading List gets widely adopted and millions of people start saving pages for later reading, a portion of those people will be interested in upgrading to a dedicated, deluxe app and service to serve their needs better. And they’ll quickly find Instapaper in the App Store.

It will be interesting to see what happens to Instapaper once Reading List comes along with iOS 5. Maybe Arment’s comments will be proven correct and Apple’s entry will actually help his company. Time will certainly tell. What do you think? Leave your comments below. 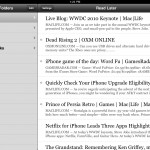