You are using an outdated browser. Please upgrade your browser to improve your experience.
by A.T. Faust III
June 30, 2011
As technology fanatics, we often take for granted (or completely overlook) the profound impact certain new pieces of consumer kit can have on personal, individual lives. Consider Evonne Barry's heartwarming Herald Sun piece regarding young Holly Bligh of Melbourne, Australia. Only nine years old, Holly has albinism. While the condition is primarily evident as an aesthetic lack of normal hair, skin, and iris pigmentation, it often also negatively affects ocular function. Unfortunately, such is the case for Holly; and, naturally, it was taking a heavy toll on her self-esteem and scholastic capabilities. But not anymore! Barry reports that the Apple iPad

has replaced a weighty magnifying glass as Holly's classroom companion, and a simple swipe of her finger now zooms in on text that once had to be enlarged by teachers on the photocopier. Holly's attention span has increased and her mother, Fiona, estimates "visual fatigue" now takes twice as long to set in. "Holly's enthusiasm to read has grown so much, and it's definitely increased her independence," Ms Bligh said.

In fact, Ms. Bligh was so impressed with the iPad's positive effects on her daughter (Holly's quite the popular gal with that sweet new tablet in tow, after all) that she sent her story and a thank-you to Apple CEO Steve Jobs himself. A few hours later, Steve replied:

"Thanks for sharing your experience with me. Do you mind if I read your email to a group of our top 100 leaders at Apple?"

Now, there's no question that the iPad is a revolutionary device. Indeed, many schools are starting programs to implement its use in daily curricula. However, it's often easy to forget the medical import and assistive potential of such new technology when it's deployed in a popular, mainstream package. Sure, the iPad's made my life easier in matters of taxing minutiae and creative expression, but my fundamental quality of life -- at its most basic level, I mean -- is largely unaffected by any of my electronic or technical toys. Perhaps I ought to consider myself lucky that way. Holly's mom sums it up best:

I know a lot of people think it's just a great gadget, but it's completely changed Holly's life. 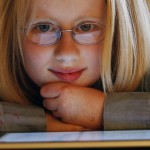