You are using an outdated browser. Please upgrade your browser to improve your experience.
by Alexander Vaughn
June 14, 2011
Earlier today, Reuters (via TUAW), reported some details concerning the next iPad, as well an upcoming MacBook Air. The details were obtained from a Taiwanese newspaper we have, of course, never heard of. Apparently, Apple will be launching a new version of their iPad-inspired laptop at the end of June, and the next iPad at the end of the year. What's so unusual about this iPad 3 they say, is its screen, which is six times the resolution of the current iPad. Yes, there are tons of rumors on everything Apple every day on the web. Most of them are goofy, but when they get on the newswire services, we have to address them. So, just in case any of you thought this is legitimate information, it is not. What happened is that Reuters got their translation wrong. I'm sure that usually doesn't get much notice, but you can't expect that when you're covering Apple. Actually, the Taiwanese newspaper reported that Apple will be doubling the resolution, giving the next iPad a Retina display. It isn't currently possible to produce 10 inch screens that have six times the resolution of the iPad (1024x768). Screen makers can barely pull off twice that resolution at the moment, including Apple. This is a big challenge both on the hardware side, and the software side (it's tough to generate such high-resolution graphics on a mobile device). Furthermore, it's not likely that Apple will be launching a third iPad this year, at any resolution, especially after the great improvements the iPad 2 received. Instead, they're going to push the envelope, and launch an even more amazing model next April. As for the MacBook Air, I'm waiting for one as well, but lets be realistic; Apple won't release a new laptop two weeks before they release Lion, their new operating system. All in all, this is good news, your iPad 2 won't be outdated for a little while. 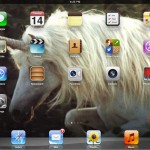 The iPad 3 Gets A Wave Of Goofy Rumors

The iPad 3 Gets A Wave Of Goofy Rumors
Nothing found :(
Try something else