You are using an outdated browser. Please upgrade your browser to improve your experience.
by Bryan M. Wolfe
June 14, 2011
Believe it or not, some iPhone/iPod touch and iPad owners never attach their iDevice to their computer's iTunes application once it is activated for the first time. Unfortunately, come upgrade time the process takes a lot longer than it should. This is especially true for Apple Retail Store employees who are often the ones asked to do the upgrade. Luckily, iCloud is about to change that, according to Apple Insider. Those of us that frequently upgrade our iDevices are probably the same ones that often backup those iPhones or iPads using iTunes. However, many do not. According to a report by OneFPS, about half of the Apple Retail Store customers who need the iDevice replaced "have never plugged them into iTunes after the initial activation and sync." This fact makes “Apple Store Geniuses (very) excited about iCloud." With iCloud, iDevices are automatically synced whenever they are connected to power and have access to a Wi-Fi connection. This reality is not only good for the customer, but also for Apple employees. According to Apple Insider, this:

should cover most users at home, work or school. Apple has also added direct iOS device configuration of its Airport wireless base stations to make this even easier for new users to set up.

Therefore, the days of lengthy iDevice upgrades could very well become a thing of the past. What do you think? Leave your comments below. 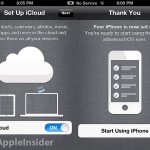 Lengthy iDevice Upgrades Could Soon Become A Memory
Nothing found :(
Try something else