You are using an outdated browser. Please upgrade your browser to improve your experience.
by A.T. Faust III
June 13, 2011
Will Strafach, the man behind Twitter's @ChronicWire, has been lighting it up out of nowhere with his recent industry leaks and announcements. Furthering that trend is this bit of back-to-school news: Apple is purportedly ready to release its fleet of iPhone 4s to its US retail stores, totally unlocked! According to the tweet, Chronic Wire even cites models and capacities:

What isn't clear, however, is which carrier chipsets these handsets'll be packing. Either way, though, this is definitely good news and a great way to really capitalize on surplus iPhone 4s that might otherwise create a supply glut come September's expected iPhone refresh. So, if you're in the market for a class-leading device with no contracts attached -- and even the possibility to operate it on an inexpensive pre-paid service (see the comments) -- life might get a whole lot better really, really soon. Of course, unlocked iPhones don't (and won't) come cheap... 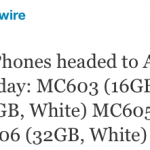 Unlocked iPhones Rumored To Come To US Apple Stores This Wednesday

Unlocked iPhones Rumored To Come To US Apple Stores This Wednesday
Nothing found :(
Try something else