You are using an outdated browser. Please upgrade your browser to improve your experience.
by A.T. Faust III
June 2, 2011
Today, during southern California's D9 conference, Microsoft finally unveiled the first public demo of where it's taking its Windows operating system. Codenamed "Windows 8," the long-in-development, much-anticipated upgrade is said to feature a fully-functional, universal touch layer. View the following video, and then move on for my impressions: As you can see, the user interface is an obvious extension of the Metro UI employed in Redmond's Windows Phone 7 series of mobile handsets, and -- depending on your personal tastes -- that's a decidedly good or bad thing. Personally, WP7 seems to be more flair than function, but Windows 8 has toned down the contrast and added a nice pastel hue to everything. Nevertheless, it promises to be a polarizing visual experience. The multitouch gestures and off-screen menu activations on display are intuitive and functional, and everything appears to be sufficiently quick (though it isn't clear what kind of processor is powering the slate in the video). I was particularly impressed with the OS' multitasking aspect, where a simple swipe takes you cyclically from application to application. The video player is especially satisfying in the smoothness and rapidity of its play activation on system app switching. Aside from the overall sense of speed Windows 8 imparts, there are actually two specific points on which the OS outshines Apple's own mobile offering. The first, a portable, touch-inspired carryover from the Windows 7 desktop OS, is called "Snap." You remember this commercial, right? The concept here is almost identical: You can enhance your workflow and productivity by running any two apps side-by-side. In fact, the lack of such a function in iOS has been fervently decried; and, if Apple doesn't prepare its own such dual-mode enhancements for iOS 5, many loyal users will likely call foul. (Even as I write this very article, I wish I could open Safari and set it beside iA Writer for easier research and citation sampling.) The second way in which Windows 8 stands out over iOS is with its on-board file organization. Because it saves files in a traditional, system-wide manner (rather than app-specifically), files created in one app can be moved quickly and effortlessly to another or uploaded to the internet via standard means. As I stated in a prior post about my hopes for iOS 5, such a feature is desperately called for:

I think a sourceable “C: drive” (or similar user-accessible storage location) for saving iDevice-created content and uploading it to various websites would help the professional workflow tremendously. For example, I can use my iPad to write every word of this very article, assigning all relevant tags, links, and referenced apps, but I cannot upload the necessary post-completing pictures unless I use a proper desktop or laptop computer.

However, there is a pretty significant caveat to all this Microsoft magic: The regular Windows experience runs underneath everything and powers all operations. The non-touch UI looks exactly like Windows 7, and -- though many argue that makes for extended software, peripheral, and legacy compatibility -- I don't like it one bit. See, I've spent most of my life as a "PC guy." Until a year ago, I'd been building Windows machines for friends and family for well over a decade. Like most power users, I enjoyed XP, hated Vista, and find Windows 7 a decent middle ground. I even run a local PC repair and recovery business in my spare time. Lately, perhaps due to my growing distaste for constantly updating drivers, running virus scans, performing defragmentations, and reformatting systems, I made the personal switch to Apple and Mac. Now, when a friend or family member wants a new computer, I tell them Apple every time. And, though it's not true there's never an issue, they need my assistance far less often. To imagine a tablet setup that requires malware protection and heavy user-intervention to manage things like hung apps and new driver installs is, at the very least, unpleasant. Part of the reason iOS works so well for so many is that it's simple, snappy, and stable. If an app crashes, it rarely affects the system itself, and necessary reboots are few and far between. I've had my original iPad freeze just once in 14 months, and it's hard to picture any Windows OS with that sort of track record. Historically, there are simply too many security holes and software conflicts on widely-used Windows systems. Otherwise, my concern is that Windows 8 will be too robust for seamless tablet operation (especially on ARM-based machines). As long as its portable OS is a mere desktop skin, it's going to be difficult to get excited about future Windows products. Honestly, it feels a bit hollow to know that the company's touch experience is not truly dedicated. Rather, it is integrated, with all of Windows' many shortcomings baked right into the one form factor that, in the eyes of a potential user, can least effectively deflect them. More than anything else, Microsoft's effort here reminds me of the recent, ill-fated ExoPC. If Windows 8 goes gold and is sold in 2012 as expected, it will be Microsoft's third reiterative operating system in four years. The company, to me, seems quite unsure of where its flagship product is headed. Attaching their tablet solution to that uncertainty is a scary proposition, and one that I will personally avoid. There are some good ideas here, absolutely. However, where Apple is applying its mobile OS elements to it's desktop line, Microsoft is doing the philosophical opposite. Windows 8 tablets will sell, but only to individuals and agencies too heavily invested in Windows to worm their way out. But, of course, there's an awful lot of those around. 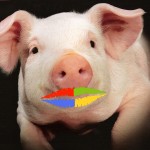 Windows 8 Touch Layer Looks Promising, But It's What's Inside That Counts

Windows 8 Touch Layer Looks Promising, But It's What's Inside That Counts
Nothing found :(
Try something else