You are using an outdated browser. Please upgrade your browser to improve your experience.
by Bryan M. Wolfe
July 28, 2011
The iPhone 5 will debut in the U.S. between Sept. 6 and Sept. 15, with the iPad 3 coming sometime after Thanksgiving. These rumors come from The China Times and first reported by MacRumors. According to the report, Apple will release its next handset in early-to-mid September with an initial order of 400,000 units. Numerous rumors have suggested the iPhone 5 will debut sometime in August or September. Therefore, this news isn’t that surprising. However, we’re not sure about the iPad 3 rumors. The iPad 2 debuted earlier this year and it would be quite unexpected for Apple to release another tablet model so quickly. Besides, although releasing a new model in the thick of the holiday season makes sense financially, would Apple really want to expose itself to long lines outside its stores just weeks before Christmas? We think not. As MacRumors reminds us:

The China Times has had a hit or miss record with Apple-related rumors, though they do seem close to Apple's suppliers in China and may certainly have knowledge of their production plans.

Our advice is to assume the iPhone 5 is coming within the next few weeks; and iPad 3, probably not. What do you think? Leave your comments below. [Photos: An iPad 3 concept by TechieDay] 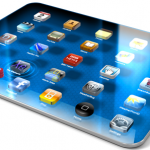 All I Want For Christmas Is My iPad 3?

All I Want For Christmas Is My iPad 3?
Nothing found :(
Try something else