You are using an outdated browser. Please upgrade your browser to improve your experience.
by Bryan M. Wolfe
July 23, 2011
The free Google Books app is no longer available in the App Store. This news, which was first uncovered by 9 To 5 Mac, could suggest Apple is beginning to pull apps that violate the company’s new in-app purchase terms of service. Or perhaps Google pulled the app itself. First unveiled in December 2010, Google Books competes directly with Apple’s own iBooks service. It allows customers to purchase e-books online and then view them via the company’s iPhone/iPod touch and iPad app. However, 9 To 5 Mac reports that the iOS app is now gone and has been since earlier this week. Neither Apple nor Google have announced why the app is no more, but there are perhaps two reasons for it. First, the Google Books app clearly violated Apple’s new terms with regards to in-app purchases. To purchase a book from the Google Books app, users were sent directly to the Google Books website via Mobile Safari instead of having the opportunity to buy the book via Apple’s own in-app purchase system. This, of course, is a big no-no now. Second, 9 To 5 Mac suggests Apple’s could have deleted the app because of the upcoming arrival of Harry Potter eBooks, which will be exclusively offered through Google Books beginning this fall. One might recall that Apple will soon lose the ability to sell Harry Potter audiobooks via the iTunes store. This has been something Apple has been able to do exclusively for sometime. Is Apple suddenly upset about all things Harry Potter? Of course, it might turn out that Google pulled the app for a reason not already mentioned. Personally, I have a hard time believing Apple would delete the app because of Google’s Harry Potter deal. However, I do believe they would pull it because it violates their new terms. Of course, if that is true, why is Amazon’s Kindle app still available? What do you think? Leave your comments below. Note: Those users that have already downloaded and installed the Google Books app will still be able to use it. However, just make sure you don’t delete it! 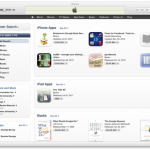 Did Apple (Or Harry Potter?) Kill Off Google Books App?

Did Apple (Or Harry Potter?) Kill Off Google Books App?
Nothing found :(
Try something else