You are using an outdated browser. Please upgrade your browser to improve your experience.
by Susan Megrund
July 28, 2011
Recently, Apple announced they have had over 15 billion apps downloaded from the App Store. At this pace, Apple seems to be on track for selling more apps than McDonalds has sold hamburgers. I remember growing up and seeing the McDonalds sign in their parking lot that said “Over 1 Million Sold.” That sign has changed over the years to over a 100 million sold, over a billion served and most recently, over 99 billon served. It was fascinating to see the numbers on that sign go up and up. Apple has experienced a similar phenomenon, but a little faster than McDonalds, thanks to the digital age we live in. In response to Apple's recent download announcment, the folks over at ZDNet were fascinated with Apple's changing numbers, so they began to figure out some possible statistics (probably over a McDonalds double cheeseburger value meal). They figured out that from 2008 to 2014, Apple is expected to sell over 100 billion apps. That is a five to six year time frame. For McDonalds, it took 46 years to reach that number. That is almost nine times faster than what McDonalds pulled off. Both a McDonalds burger and the average app price are about that same, which does makes for an interesting comparison. Google is looking at similar app sales in the coming years for their Android devices, which goes to show we might be shifting from a fast-food nation to an app-nation. If you had $1.50 in your pocket, what would you spend it on? The latest and greatest app from the App Store or a snack from McDonalds? If the predictions are correct, I am sure the folks over at Apple are doing a happy dance over a Happy Meal from time to time. 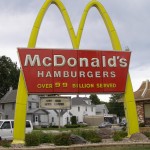 Apple On Track To Sell More Apps Than McDonalds Does Burgers

Apple On Track To Sell More Apps Than McDonalds Does Burgers
Nothing found :(
Try something else