You are using an outdated browser. Please upgrade your browser to improve your experience.
by A.T. Faust III
July 11, 2011
We've got another bit of news on the patent front concerning Apple and its seeming daily slew of invention applications and federal approvals. Reported as usual by the folks at Patently Apple, today's unveiling includes innovation on two fronts: software and hardware. The former is involved with massive functional and gestural iBooks enhancements, while the latter deals with a new kind of indoor-capable GPS alternative.

Apple states that future iBooks will allow users to call up images, animations, interactive content and video content to provide a better understanding of a word, phrase or item and so forth. Additionally, a reader will be able to have portions of the text read to them if they so choose.

Essentially, such functionality will be divided by "adult" and "children" media designations. In children's books, tapping a word can call up images (for nouns) and animations or videos (for verbs). Swipes across words and sentences can also be used to initiate an audible reading of the content in question. The ability to present embedded games related to the text is also being considered, though this will probably be non-standard and developer-assigned. Additionally, for those learning new languages, selecting a word or phrase, for example, could toggle a native-language pop-up to aid a student in his studies. Adults, however, may choose to keep single-tap and -swipe gestures as currently defaulted, assigning multitouch to engage these new aids. 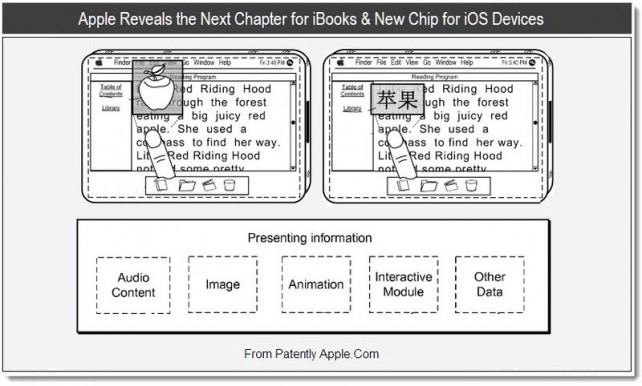 However, all such embellishments are set to be user-defined and completely optional, which is a good thing for readers interested in the preserved, straightforward experience iBooks currently offers. But the implications of Apple's filing seem to go far beyond e-books in general. With the impending launch of Newsstand with iOS 5, digital magazines are going to get a major industrial push. As such, the patent is looking to liven up the periodical treatment with new kinds of interactivity.

In an application involving the integrated systems and antenna arrays of new iOS devices, Apple hinted at a new positioning system said to use

a combination of satellite and television signals from a company called Rosum Corporation. Whether that example was used to identify a generic type of chip or that particular company's chip isn't known at this time. But the technology that the Rosum Corporation developed is definitely worth noting. In Q1 2010 Rosum Corporation and partner Siano developed a revolutionary location and synchronization solution for indoors and urban environments.

In Bloomberg's "snapshot" page for Rosum Corporation, the company is said to provide

a local area TV-GPS technology for supporting police, fire, and rescue personnel, as well as for tracking people in shopping malls and theme parks. In addition, it offers ALLOYT, a location and synchronization solution for indoor and urban environments; and positioning technology services to device and service partners.

As television stations have an energy output some 100,000 times that of traditional GPS systems, the potential for a whole new avenue of geolocation and advertisement is palpable. While that last bit may seem somewhat less than savory, it appears that every leap in electronic communication inevitably comes with the opportunity to tie in new and ever-ubiquitous commercial salemanship. Fortunately, Apple is great about keeping ads nonintrusive, so I'm fairly confident we'll be able to enjoy these new iDevice capabilities in peace and quiet if we so choose. 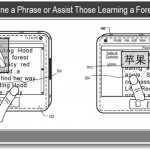