You are using an outdated browser. Please upgrade your browser to improve your experience.
by Bryan M. Wolfe
July 28, 2011
Not long ago, gaming was all about dedicated consoles such as the Xbox or PlayStation. Not anymore. Today, the largest gaming growth is happening on the iPad, according to EA CEO John Riccitiello, who recently spoke with IndustryGamers. According to Riccitiello, just 40 percent of the games industry is now console-related, compared to 80 percent as late at 2000. As such:

"We have a new hardware platform and we’re putting out software every 90 days. Our fastest growing platform is the iPad right now and that didn’t exist 18 months ago.

Riccitiello also believes there is a diminished return on constantly adding more bells and whistles to games, saying that power upgrades are becoming inconsequential. He states:

"I think there’s going to be an interesting debate when you get to processing power beyond what you can push up with a 1080p or a 720p [system]. Most people squint between 1080p and 720p, because what’s the difference, seriously? I would argue that there’s more to be provided in terms of value for the consumer in micro-transactions and social experiences and driving those better in cross-platform gameplay between a console and a PC and a handheld device and a social network than there is supercharging graphics.” 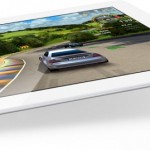