You are using an outdated browser. Please upgrade your browser to improve your experience.
by Bryan M. Wolfe
July 26, 2011
In 2010, Apple purchased Swedish-based Polar Rose, a company that specialized in face detection algorithms. Now, Apple plans on offering this technology as a public developer API for iOS applications, according to news first reported by 9 To 5 Mac. Polar Rose’s technology is already available in OS X Lion’s Photo Booth application. However, Apple is now making the technology available for iDevices as well. According to 9 To 5 Mac:

This presumably would power face detection via live motion imagery. The significance of this finding is that Apple is making face detection an even easier feature for developers to implement. Perhaps this is even a sign that Apple is working on some new iOS applications that take advantage of the software. Maybe Apple will even port OS X Lion Photo Booth’s face detection feature to the iOS version.

Take a look: This is pretty cool stuff, in our opinion. After all, face detection functionality could be employed in a number of different markets including photography, law enforcement and more. It will be interesting to see which developers begin using the API first. What do you think? Leave your comments below. [Photo: 9 To 5 Mac] 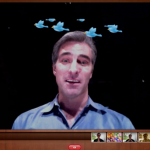 Face Detection Functionality Now Available For iOS Developers
Nothing found :(
Try something else