You are using an outdated browser. Please upgrade your browser to improve your experience.
by Bryan M. Wolfe
July 28, 2011
A new patent application suggests Apple is working on ways to improve the battery life of future iDevices and MacBook Pros by using "jelly roll” battery technology. Also known as Swiss rolls, these are found in “cylindrical, rechargeable batteries, like a typical AA, AAA or D batteries,” according to Apple Insider. The filing, called “Battery with Multiple Jelly Rolls in a Single Pouch” is clearly aimed at improving the existing lithium batteries found in current iDevices. Accordingly:

But to further improve the efficiency of batteries, making them smaller and even more efficient, Apple has proposed a new kind of battery cell with a set of jelly rolls found in a foil pouch, rather than just one. Just like in a rechargeable AA, Apple's concept includes a cathode and anode divided by a separator. Conductive tabs within the battery cell would connect cathodes and anodes from the jelly rolls found in the pouches.

While most consumers probably don’t care what type of batteries exist in their iDevices – just that they work, it’s nice to see Apple trying to make improvements. This report follows one earlier this week that indicated Apple might eventually do away with batteries that require an electrical charge and instead offer solar-powered components. With regards to these “jelly rolls,” they sound yummy, don’t you think? Leave your comments below. 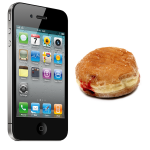 Future iDevices Could Be A Lot Sweeter By Including 'Jelly Roll' Batteries
Nothing found :(
Try something else