You are using an outdated browser. Please upgrade your browser to improve your experience.
by Susan Megrund
July 7, 2011
It comes as no surprise that games are the most popular app category for smartphones. Now, the Nielsen Company has proven that iPhone users love their games, and even spend more hours playing per month than other smartphone users. Not only are games more popular than other apps, users are willing to pay for games versus news apps. The Nielsen research shows that 93 percent of consumers who downloaded an app in the last 30 days were willing to pay for a game, versus 76 percent who were willing to pay for news.

Of all the smartphone consumers, iPhone, Android and Windows 7 users all download the games they play, while BlackBerry or other feature phone users play the pre-loaded games on their device. This may be an interesting reflection of the type of user the BlackBerry attracts. The Nielsen study also breaks down the time spent using the game apps. It shows the average for mobile game play is 7.8 hours per month. However, iPhone user's are the highest at 14.7 hours per month and BlackBerry users are the lowest at 4.5 hours per month.

The BlackBerry seems to be the most popular among the corporate business world, which is probably the reason for the low figures when it comes to having a little fun on your phone. The applications that are available on BlackBerry are also pretty lousy. Although it has improved over the years, it is nothing compared to the App Store. The statistic that iPhone users play games over twice as much as the average smartphone user and over three times as much as BlackBerry users could shed a little light on the personality types of smartphone users. I would love to see a study by Nielsen on the personality or happiness of the smartphone user. Not to suggest the iPhone brings ultimate life happiness; however there seems to be a different mindset or a little more “happy go lucky” and creative sense among iPhone users. Nielsen, are you willing to take that on? I hope you don’t all use BlackBerry devices. 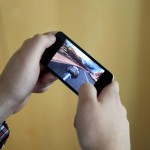 iPhone Users Beat The Competition When It Comes To Playing Games

iPhone Users Beat The Competition When It Comes To Playing Games
Nothing found :(
Try something else