You are using an outdated browser. Please upgrade your browser to improve your experience.
by Bryan M. Wolfe
July 26, 2011
Apple and the New York Metropolitan Transportation Authority (MTA) are close to signing an agreement to open the largest Apple Retail Store in the world at the city’s historic Grand Central Terminal. The 23,000-square-foot store will replace Charlie Palmer’s Metrazur restaurant, according to The New York Post. According to a statement from the MTA, the deal:

“Has the potential to bring a great new shopping destination to iconic Grand Central Terminal and significantly increase revenues for the MTA's transportation system."

Apple will pay the MTA $800,000 per year to rent the new location for ten years. Thereafter, the rent will increase to $1 million annually. Once completed, the Grand Central Store will replace London’s Covent Garden as the world’s largest Apple Retail Store. Accord to the Apple Insider, Apple paid Charlie Palmer's $5 million to move out of the terminal's east balcony eight years early. Metrazur closed on July 1st after 11 years of service. The new Apple Store is expected to open before the holidays. 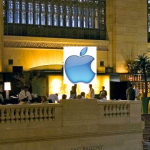