You are using an outdated browser. Please upgrade your browser to improve your experience.
by A.T. Faust III
July 11, 2011
Released to developers today, Apple's iOS 5 beta 3 is hiding what could be the harbinger of the company's completely buttonless mobile future. First reported by 9 to 5 Mac, the interface -- included with this latest build as a revamped accessibility panel -- seems quite useful, giving users the option to set volume, screen orientation, lock or shake the display, and more. The video below shows everything in action. Now, this vehicle isn't particularly pretty, nor does it exude the traditional and iconic Apple "style." To be honest, though, none of iOS' accessibility enhancements has ever been a true pleasure to behold, so that's nothing new. Indeed, more than any part of the operating system, Accessibility has been a bare-bones, get-the-job-done category. It works, but it ain't pretty. However, the mere fact that Apple's trying this out is indicative of where they want to go. After all, it's long been Steve Jobs' mission to abolish the button, and -- with many speculating the next iPhone won't have a physical "home" toggle -- there may be lots more in store for this particular bit of news. 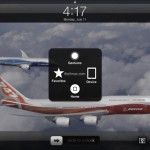 Latest Dev Build Offers Glimpse Of Buttonless Future
Nothing found :(
Try something else