You are using an outdated browser. Please upgrade your browser to improve your experience.
by A.T. Faust III
July 28, 2011
Patently Apple has an intriguing followup to their early-July reveal of Apple's exciting CAD-related plans. According to the venerable blog,

Apple is working on a new "Drafting Application" that will utilize "Virtual Drafting Tools" such as a virtual ruler, protractor, compass and more.

Explained in typically-cryptic legal jargon, the patent ostensibly concerns itself with the assignment of gesture commands to toggle some of the most commonly-used toolbar items in traditional CAD software environments. Cited in the application is the heavily-metaphored virtualization of three of the drafter's most basic, fundamental instruments; and, while the diagrams and interfaces discussed seem decidedly iPad-oriented, Patently Apple points out that these multitouch manipulations

could also be used with advanced touchpad commands such as those now debuting with OS X Lion.

Take a look for yourself: On the surface, the outlines seem little more than another addition to Apple's large library of exclusive gesture rights, and I'm not sure they go any deeper. Even the application's stated "Problem to Solve" seems somewhat superficial, addressing little else beyond increasing the efficiency of CAD tool call-ups. Overall, the patent is extremely specific and of little mass-market appeal or interest. Of course, Mac- and iPad-using engineers and architects will probably be tickled to add a little interactive zing to their otherwise drab, point-and-click workflows. 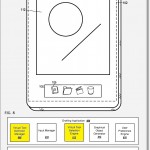 New Apple Patent Suggests New CAD App Is In The Works
Nothing found :(
Try something else