You are using an outdated browser. Please upgrade your browser to improve your experience.
by A.T. Faust III
July 29, 2011
Though professionally concerned with Apple's mobile offerings and general technological impact as a leading industrial stalwart, I happen to also be (to my undoubted financial detriment!) a considerable gadget fanatic and electronics collector. It is little surprise, then, that I love Nintendo's wares nearly as much as my iDevice lineup. In fact, Nintendo's original Game Boy was my first real introduction to the wonderful world of digital consumer entertainment; and, through the years, I've owned nearly every machine and first-party blockbuster the legendary outfit has released in the US market. Until just a couple of years ago, all indications were that Nintendo -- though still managing small revolutions in the staid world of console gaming -- was really padding its earnings with the brand's overwhelming "portable" domination. Challengers seemed altogether unable to put a dent in the massive market- and mindshare that Nintendo claimed with each successive, game-centric handheld. But it is in that very "game-centric" designation that a very real (and very big) problem was lurking, making itself quite finally evident with today's announcement that the Japanese giant is reducing the MSRP of its brand-new 3DS system from $249 to $169 come August. As reported by Engadget, this $80 per-unit reduction is likely a desperate attempt to drum up sales in the wake of an aberrantly (and abhorrently) slow sales quarter:

Nintendo plans to sell 16 million 3DS units in the financial year, but still slashed its financial projections for the year from ¥110 billion to just ¥20 billion.

Faced with such an unexpected and staggeringly divergent reality, Nintendo's flagship device is now approaching "loss-leader" status, something the company has never before allowed. Now heavily reliant on software sales to offset hardware production costs, Nintendo is witnessing the dawning of a new (and unfamiliar) day in the Land of the Rising Sun. Worse, to properly address these developments, Nintendo unfortunately lacks both the network infrastructure and delivery-system knowhow to quickly move enough of its vast franchise library into the eager hands of faithful, willing gamers worldwide. And it certainly doesn't help matters that Nintendo views Apple -- the single entity immediately capable of pulling Mario out of the red -- as it's so-called "enemy of the future." Though bold and brave, that sort of thinking is, in 2011, fundamentally misguided and categorically naive: Fighting Apple in the handheld arena is a fool's errand, a losing battle, and a lost cause. Instead, it's time for Nintendo CEO Satoru Iwata to lay down his arms and, with arms open, come to terms with Cupertino. And by terms, I mean terms -- business terms! Strategic arrangements! A partnership! Well, a limited partnership, anyways. In banding together, Apple can solve Nintendo's social and connected (and socially connected) shortcomings as Nintendo expertly addresses Apple's single most pressing gaming need: a fully-realized, traditional control array. In short, Nintendo needs to use its industry-leading ergonomic prowess to manufacture and sell a licensed 30-pin (and/or Bluetooth-enabled) controller add-on for the iPod, iPad, and iPhone. With the game-maker's time-tested and unrivaled ability in this field, our iDevices could finally have a legitimate, tactile gaming interface to invigorate the myriad iOS titles currently suffering from clumsy, compromised modes of interactivity. In fact, Nintendo could even charge a small licensing fee to developers interested in coding for the peripheral, and, coupled with the sale of the controllers themselves, Nintendo could easily and quickly turn a substantial profit utilizing its main competitor's most coveted assets. Even more importantly, though, Nintendo could finally dust off its backlogs and use iTunes to speedily and efficiently serve 200 million paying customers all those retro classics we gamers constantly crave. Who among us wouldn't happily spend $3 to $5 a pop to play old Super Mario titles, Donkey Kong Lands, the Zelda series, Metroid and more, all on our iDevices? In sporting terms, such an endeavor would see Nintendo filling the role of "visitor" in a big-time series. Sure, the grandstands won't be overflowing with their fans, but it's still a game worth playing hard, and there are still large sums of money to earn. And the best part, for the Big N, is that none of this would preclude or interfere with the company's current-generation handheld and next-gen console efforts! Nobody in the market for a 3DS or Wii U is going to pass on those items for a simple iPhone or iPad accessory, nor do such buyers purchase these systems for their (so far empty) promises of backwards compatibility and classic digital downloads. For Iwata and company, this sort of radical game-plan yields nothing but added value using a mostly-overlooked, 20-year-old cache of great games; and Nintendo carries the lofty cachet to move iDevice add-ons like no other brand can. Nintendo, you're struggling when (and where) you most certinly shouldn't. Make the inexpensive controller, charge a reasonable premium, and crank out quality ports like there's no tomorrow. Don't worry about tweaking titles with upgraded graphics or new music or on-screen overlays, either; We don't want that. All we require is straight-up, vanilla, no-nonsense Nintendo goodness. There's no shame in being a bestseller on a competitor's platform, especially when your modern advances aren't possible anywhere but your own backyard. It's literally a turn-key opportunity, and there's no better kind of promotion than one that effectively familiarizes a massive public with your hard-earned, quality pedigree. Nintendo is the best game-maker out there. Similarly, Apple has the best, most pervasive, most efficient hardware and mobile OS on the planet. The two should tie the knot, already! There shouldn't be any fear of commitment here. As long as both companies do what's best for their users and their bottom lines, both can see other people all day long. It's called an open marriage. And this is an open invitation to make it happen! 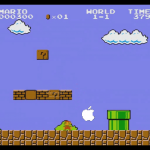 Nintendo's Barely Treading Water, But Apple's Got Extra Life Jackets
Nothing found :(
Try something else