You are using an outdated browser. Please upgrade your browser to improve your experience.
by Mike Lata
July 14, 2011
Gameloft has just released the GTA and Max Payne-inspired action game, 9mm. They also surprisingly released the title as a universal app so everyone can enjoy it fully, and they even added some iPad 2 optimizations. The game's storyline revolves around the leader of a police team named John "Loose" Kannon. A drug lord's brother ends up being killed by a group of cops who bend the law and steal millions in cash. Now the drug lord and his group of thugs are hell bent on revenge and it is your job, as Kannon, to prevent this from happening. The game takes a page from Max Payne in the sense that you can slow down time while engaging in gun fights. You will be able to jump, shoot and perform stunts while you do this. All kinds of weapons are available from shotguns to sniper rifles. The action will also take you to various settings and locations like the: Latino suburbs, night club, police department, rich suburbs, industrial area and Mexico. Besides a single-player campaign, the game also contains online multiplayer where up to 12 players can battle it out on four maps. Two multiplayer modes exist and they are: free for all, and team deathmatch. The graphics look stunning, especially if you own an iPad 2. The game also features a hip hop soundtrack with songs from famous artists. These include: Apathy, Beanie Sigel, and Freeway & Jake One. The game is currently available on the App Store for $6.99. 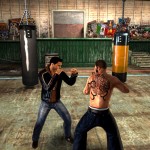