You are using an outdated browser. Please upgrade your browser to improve your experience.
by Bryan M. Wolfe
July 18, 2011
It looks like the iPhone has regained momentum against Android ahead of the launch of the iPhone 5. This is the conclusion of a new ChangeWave report published today and first reported by Electronista. With the iPhone 5 expected to launch sometime in the next few weeks, there is growing interest in the handset from would-be buyers. However, this movement towards the iPhone (and away from Android) really started at the beginning of the year when the Verizon iPhone debuted. At the end of 2010, future smartphone buyers were largely split between those wanting an iPhone and those expected to buy an Android-based device. However, since that time, the iPhone has gained ground. In December 2010, 36 percent of would-be smartphone buyers selected an iPhone versus 35 percent for Android. According to the survey, however, of those expecting to get a smartphone in the next 90 days, 46 percent planned on getting an iPhone, whereas just 32 percent expected to pick Android. This split is the widest going back to September 2009, except for when the iPhone 4 debuted in June 2010. Meanwhile, BlackBerry demand has fallen to just 4 percent, one of its lowest levels ever in a ChangeWave survey. As late as December 2009 this number was 18 percent. The survey also looked at OS customer satisfaction and the likely impact Apple’s iCloud solution will have on the overall smartphone market. To date, 70 percent of iPhone owners are very satisfied with their iDevice, versus 50 percent of Android owners. Windows OS (27 percent) and RIM OS (26 percent) owners were significantly less "very" satisfied. Finally, 29 percent of existing Apple product owners feel the iCloud service will make them more likely to buy Apple products in the future. Among non-Apple product owners, this number is 13 percent. This suggests iCloud could become very popular and open the iPhone and iPad to new buyers. ChangeWave surveyed 4,163 consumers to gauge smartphone demand. Of these, 89 percent were located in the U.S. What do you think? Leave your comments below. 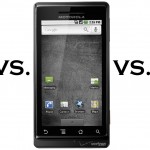 The iPhone Begins Eating Android For Lunch Ahead Of iPhone 5 Launch
Nothing found :(
Try something else