You are using an outdated browser. Please upgrade your browser to improve your experience.
by Bryan M. Wolfe
July 14, 2011
Google looks like it will soon get into the photo-sharing business. Just days after the tech giant released its Google+ social networking service, they are poised to release another new product called Photovine, in news first reported by Gizmodo. From the looks of it, Photovine is a way to connect people by way of similar photos. However, the service is less about sharing photos with friends. Instead, it connects people with similar interests. Google does this by attaching photos via vines that include a caption or theme. For example, somebody might upload a photo of The Bellegio resort in Las Vegas that includes the caption, “Vegas Baby!” From there, others can add their own Vegas photos and make similar comments. Naturally, as more photos are added the vines grow; hence the service's moniker, "Plant a photo, watch it grow." Google has setup a nice teaser page at http://photovine.com that suggests the service is coming soon and will be available for the iPhone/iPod touch. Check out this teaser video, which takes the theme "warm and fuzzy" to the extreme: We'll let you know when Photovine is released into the App Store. What do you think? Do you think Photovine has promise? Let us know by leaving comments below. 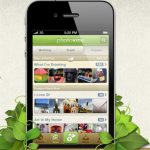 What Is Google’s Photovine?
Nothing found :(
Try something else