You are using an outdated browser. Please upgrade your browser to improve your experience.
by A.T. Faust III
August 13, 2011
Patently Apple blah blah blah Apple patents. Right? Well, in a newly-published post today, the respected blog has put forth an interesting trio of relevant patent dissections that could see the light of day sooner rather than later. The first patent discussed might've seen its theoretical inception way back in the "Antennagate" aftermath of the iPhone 4's launch. See, Apple's long been struggling with how to effectively operate a wireless antenna within an uninterrupted, all-metal enclosure. To get around the practice of including plastic-filled exterior cutouts, the Cupertino company is toying with the idea of externalizing the antenna in some kind of clip. According to Patently,

Apple states that the invention could apply to their iPod family (MP3 players), a radio, an audio/video recorder, a mobile telephone, personal digital assistant, tablet computing device, or other similar device. Considering that the patent figures represent an "exploded view" of the device, you have to wonder if this is associated with an iPhone-nano-like device. It's just a thought.

While I doubt this tech will make its way into the iPad or iPhone (or supposed "iPhone nano"), it does seem perfectly suited to help bring iCloud access and AM/FM-/Bluetooth-support to the popular iPod nano. The second patent, though brief, is perhaps even more far-reaching in Apple's overall mobile strategy. Simply, it's described as a

The final patent is a seemingly trivial matter, but it has easily the most immediate implications of this entire presented group. Specifically, it covers a more refined means of applying Apple's proprietary oleophobic coating to mobile touchscreen displays.

The oleophobic ingredient could be provided as part of a raw liquid material in one or more concentrations. To avoid adverse reactions due to exposure to air, heat, or humidity, the raw liquid material can be placed in a bottle purged with an inert gas during the manufacturing process. The bottle could be placed in a liquid supply system having a mechanism for controlling the amount of raw liquid material that passes through the liquid supply system. Upon reaching the vaporizing unit, the liquid could be vaporized and the oleophobic ingredient within the liquid can then be deposited on the electronic device component surface. As the liquid supply is drained from the bottle, additional inert gas is supplied in its place to further prevent contamination.

Obviously, whatever Apple's current method is for such a coating application, it isn't effective or efficient as they'd like. And, now that I've typed (tapped?) this whole article on my iPad, I better go wash that oleophobic stuff off my thumbs. I'll only be a minute. In the meantime, if you're into that sort of geekery, you can check out Patently Apple's post for all the details. 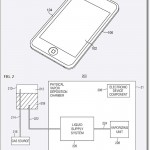 Apple Patents Clip-Based Antenna, Stays Bright And Greasy
Nothing found :(
Try something else