You are using an outdated browser. Please upgrade your browser to improve your experience.
by Mike Lata
August 18, 2011
Gepetto Games has recently unveiled some info about their upcoming dungeon crawler, with action RPG elements, called Descend. The game looks to offer retro gameplay based on computer games of the 1990s like "Eye of the Beholder." It is also based on a first person perspective with grid-based movements. Control is accomplished via various arrow keys, but the actual combat is turn based. Descend will also have a party system thus allowing you to fight enemies with various characters, according to Touch Arcade. The visuals will also be based on 3D models rather than 2D sprites. If you enjoy classic PC games, dungeon crawlers, or action RPGs, the game should be a blast to check out. Look for it to hit the App Store in late September or October. 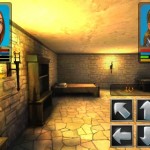