You are using an outdated browser. Please upgrade your browser to improve your experience.
by Alexander Vaughn
August 20, 2011
We're not quite sure if this is a new feature, or actually just a bug, but we're getting a lot of reports concerning a potential interesting little change  in the iOS 5 App Store app. Indeed, it seems that the App Store is now allowing some users running the iOS betas to update their apps from the update tab without leaving the App Store. Basically, the individual update button is no longer yanking users out of the App Store to have them watch apps update on the home screen. Rather, they're now conveniently left in the App Store to continue shopping, while the apps update in the background. It makes more sense as most users usually go to the App Store to get apps, and not primarily to update what they already have. Of course, this could suggest that Apple is finally planning to let users download many apps at once, without leaving the App Store. Currently, the system is very friendly to novice users, as right after a purchase, iOS sends you to the app being installed. When you want to download a bunch of apps at once, however, or if you're trying to restore your apps manually after a reset, the current system that forces you to go back to the App Store for every download is a drag. Not to mention, letting people queue downloads would probably push them to buy more apps. Hopefully, today's change is an indication that Apple will be pushing that feature sometimes soon. [Image Credit: AppleInsider] 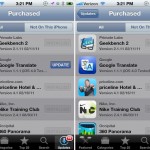 iOS 5 To Let You Update Apps Without Leaving The App Store
Nothing found :(
Try something else