You are using an outdated browser. Please upgrade your browser to improve your experience.
by Alexander Vaughn
August 19, 2011
Spotted by 9to5mac on the White House's Flickr account, this shot of US Vice President Joe Biden showing an iPhone app to President Barack Obama is making the rounds on the interwebs today. The official caption reads:

It's not new to see iDevices inside the White House. Barack Obama famously owns an iPad, which he reportedly loves. To see an iPhone there is a surprise though, as it was widely reported that the device had never been approved to be used by the President for security reasons. It is possible, however, that the secret service made some progress since his arrival, or that this iPhone simply isn't theirs. As you can imagine, everybody is dying to find out what they're running. Seeing Barack's smile, my guess is they're watching Robin's latest Appisode, but I might be wrong. What do you folks think? 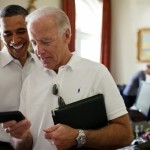 iPhone & App Store Now Entertaining The President
Nothing found :(
Try something else