You are using an outdated browser. Please upgrade your browser to improve your experience.
by Bryan M. Wolfe
August 30, 2011
Hours after Apple released its iTunes Match service to developers, we’ve learned more about it, both the good and the bad. For a review, iTunes Match is a service that will be made available to all iTunes users beginning with the release of iOS 5 sometime this fall. It allows users, for $24.99 per year, to sync all of their iTunes music with Apple’s new iCloud service. The service lets you store you entire music collection, including music you’ve ripped from CDs or purchased somewhere other than iTunes. It works by determining which songs in your collection are available in the iTunes Store. Any music with a match is automatically added to your iCloud music library for you to listen to anytime, on any device, while the rest is automatically uploaded. Then, all songs that match play back at 256-kbps iTunes Plus quality – even if your original copy was of lower copy. The Latest Developments Closed To New Developers First, it was announced earlier today that developers who hadn’t yet signed up for the service are now out of luck. For now, Apple has stopped accepting new iTunes Match customers. However, we’ve been told that more beta testers will be added at a later date. Not Working Properly In addition, late last night we began receiving reports from developers (those that did sign up) complaining that iTunes Match was taking a long time to actually sync music with the iCloud service, regardless of the number of songs currently in their iTunes library. In fact, some reported getting numerous errors that required a complete system reboot. A quick check with our developer contacts today, however, indicates those syncing problems are now resolved. However, the amount of time needed to sync was still noticeably slow. Song Limitations The biggest complaint about iTunes Match – so far anyway – is the reported 25,000-song upload limit. We don’t know if this number is simply there for beta testing purposes, or if it will remain once the service goes live. If anything, perhaps Apple would be wise to eventually offer more storage capacity for songs, even it that means having to spend more money. The Service Itself Our first reports indicate iTunes Match works seamlessly, both in iTunes and on iDevices. The following is an account based on discussions with a number of anonymous developers who just starting using the service. To get started (once you make your $24.99 payment), you must click on the iTunes Match icon that shows up right under iTunes Store on the left side of iTunes. Next, you’ll need to indicate that you’d like iTunes Match to begin syncing. You will then see a screen that offers three steps. These include: During each of these automatic steps, you can continue using iTunes. Naturally, however, you’ll need to keep iTunes opened for the process to finish. Once the final step begins, you can turn on iTunes Match on each of your iDevices. The ON/OFF switch magically appears in the Settings app under Music. Once this is turned on, iCloud will automatically begin matching and/or replacing songs on the iDevice with those from the cloud. Note, however: Once this process starts on your iPhone/iPod touch or iPad, Apple will delete every song on the iDevice and begin again. Also recognize that syncing on an iDevice appears to terminate the same process within iTunes on your Mac. Our best advice, at least for iTunes Match beta customers, is this. Begin the syncing process and let it go, both on your computer and iDevices. Until we get a better handle on how long the entire process takes, it’s best to just let it do its thing. Summary Obviously, iTunes Match is not yet a completed product. Therefore, much of what has been discussed in this article may eventually be modified or deleted all together. After all, that is what beta testing is for. One final note: Despite already paying $99 per year to become an iOS developer, Apple has decided to charge developers extra to test iTunes Match. These users must pay the same fee that will be charged to everyone, $24.99 per year. In doing so, Apple promises an extra three months of iTunes Match service for those users beginning when the beta actually ends. What’s up with that? We’ll keep you updated on iTunes Match and what it will mean for iCloud, iOS 5 and the like. In the meantime, feel free to comment here about the service. 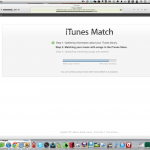 iTunes Match: What You Need To Know

iTunes Match: What You Need To Know
Nothing found :(
Try something else