You are using an outdated browser. Please upgrade your browser to improve your experience.
by Susan Megrund
August 17, 2011
It appears orangutans love the iPad as much as humans do. As reported by MSNBC, zookeepers at a Milwaukee, Wisconsin zoo, began an experiment to see how these primates would react to the iPad. To their surprise, they love playing games, drawing pictures, watching videos, interacting with books and discovering new things. As of right now, none of the orangutans own their own iPad as the zookeepers fear they may snap one right in half. They are looking into creating a case that would be orangutan proof. I imagine many humans may invest in a sturdy case like this for their own children! Not to start the creation/evolution debate, but orangutans are right up there with chimpanzees in their human similarities. Their DNA is 97 percent the same as ours. So it is apparent that we were destined to naturally love an iPad. This concept all started as an April Fools' Day joke, as one of the gorilla keepers at the zoo was going to give an iPad to a gorilla to play with. So John Engel, the orangutan enrichment coordinator at the Milwaukee zoo said, “why not?” This birthed the new enrichment program for the orangutans, who enjoy using their apps three to four days a week for 20 minutes at a time. Currently, there are two orangutans, MJ and Mahal who get the luxury of free iPad time. Once an orangutan friendly case is developed, Richard Zimmerman, the director of Orangutan Outreach at the zoo, hopes to grow the program even further.

"One of our goals is to be able to have the orangutans interact and communicate amongst themselves ... essentially being able to go online and see who else is online ... and contacting them to be able to 'play,'" he said. "We've been calling it 'Primate Playdate.”

The zoo plans to spread their program to other zoos across the country. Once they do, the hope is the orangutans will go online and play games against each other from zoo to zoo. This all sounds a little crazy, but I guess it shows our tablet behavior is in our genes. If someone 20 years ago said we would be playing games, chatting or using Skype on a paper sized device, we would have all had a good laugh. I wonder if the orangutans know how to play Angry Birds yet? 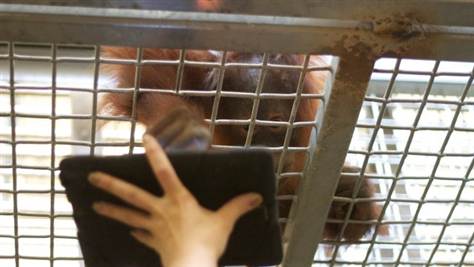 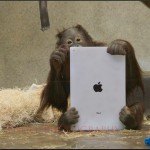 Loving The iPad Is In Our DNA And Orangutans Prove It
Nothing found :(
Try something else