You are using an outdated browser. Please upgrade your browser to improve your experience.
by Mike Lata
August 16, 2011
Former lead programmer of Bioware, Tobyn Manthrope, is bringing an action RPG to the App Store on Thursday, August 18, according to Pocket Gamer. The upcoming game is called "Emissary of War" and should be available for all the iDevices. "Manthorpe highlighted the influence of his previous work on this new hack 'n' slash game world, citing Baldur’s Gate, Neverwinter Nights and Dragon Age as big inspirations," Pocket Gamer further reports. Longtime PC gamers, should be pleased that such classics have influenced the creation of this iOS title. "Baldur's Gate," for instance, is often called one of the greatest role-playing games of all time (and its sequel is even more massive and revered). BioWare continues to be a big presence on consoles to this day, with the Dragon Age games being a prime example. Emissary of War looks like it will be an action-RPG dungeon crawler with hack and slash gameplay. It will also be played from a top-down perspective. The visuals are one stunning aspect to the game that makes it truly stand out. Expect various cutscenes to be present in the game along with detailed environmental factors, like leaves being carried by the wind. The game puts you in the role of a barbarian named Ghent. He goes on a peaceful mission that ends up not going as planned. As a result he must embark on a dangerous quest with your help guiding him along. For those that are still skeptical, the first chapter will be available for free with additional game content costing $2.99. 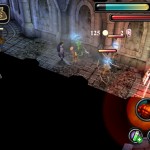 New Action RPG To Hit iPhone And iPad On August 18

New Action RPG To Hit iPhone And iPad On August 18
Nothing found :(
Try something else