You are using an outdated browser. Please upgrade your browser to improve your experience.
by A.T. Faust III
August 4, 2011
Late last Thursday evening, former industry power-player Nortel announced the winners of its recent patent portfolio auction. In the reveal, we learned that a consortium of tech juggernauts spearheaded by Apple and Microsoft (but also including RIM and Sony, among others) won Nortel's 6000+ patent package with a staggering $4.5 billion bid. As a result, Google and Intel -- in a coalition of their own -- were heavily outbid, having put up an opening offer of just $900 million. Now, in true sore-loser fashion, Google is throwing a world-class tantrum. Assuming the role of the public screaming child, Google Senior VP and Chief Legal Officer David Drummond today penned a classic bit of hypocrisy on Google's official blog, claiming Nortel's auction decision has yielded

a hostile, organized campaign against Android by Microsoft, Oracle, Apple and other companies, waged through bogus patents. ...A smartphone might involve as many as 250,000 (largely questionable) patent claims, and our competitors want to impose a “tax” for these dubious patents that makes Android devices more expensive for consumers. They want to make it harder for manufacturers to sell Android devices. Instead of competing by building new features or devices, they are fighting through litigation.

Curiously, this sort of altruistic outrage would seem to fundamentally preclude Google's proved interest in acquiring these very same patents; and there's little chance the company would've shared their winnings freely in the interest of "innovation." Also, it is important to note that Drummond's attitude is completely assumptive: There has so far been no news of Apple, Microsoft, or anyone else using these newly-acquired patents in any offensive or preemptive moves against Google or its Android OS. Speaking of Google's mobile operating system, we'd be remiss not to point out the currently-active (and very likely legitimate) lawsuit Oracle's levied against the search giant in the latter's allegedly blatant misappropriation of protected Java code for its Dalvik virtual machine architecture. There is an extremely good chance that Google illegally copied patented code in building out Android's success, and that reality makes Drummond's attitude all the more moralistically questionable. Ars Technica has a particularly apt writeup of these proceedings and -- in an update to their take on the story -- quote a recent tweet by Microsoft General Counsel Brad Smith, who reminds everyone that

Google says we bought Novell patents to keep them from Google. Really? We asked them to bid jointly with us. They said no.

If Google were so interested in "free trade" and "fair play" regarding Nortel's IP, the refusal to join hands with other large companies in securing those rights and freedoms makes no sense whatsoever. For a price likely lower than their opening offer, Google could've shared the very assets the company now claims should be available to all. Sure, Google's upset -- it should be. After all, it lost an important, valuable series of pertinent technological properties in failing to properly anticipate an unexpectedly costly transaction. As TechCrunch's MG Siegler points out,

It’s not just that one of their major rivals won the rights to the over 6,000 patents. It’s that all of them did.

That definitely sucks. But come on, Google, you care as much about transparency and cross-industry cooperation as any other big company. That is to say, you don't care about it at all. You want what everyone wants: leverage and power and exclusive tech to promote your platform. On the bright side, since you're so dedicated to innovation, you'll surely be able to invent something new we can all swoon over, right? And besides, you weren't going to get that from a series of old patents anyways. 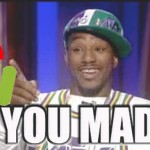