You are using an outdated browser. Please upgrade your browser to improve your experience.
by Bryan M. Wolfe
August 8, 2011
Orange users in the UK are now able to receive free movie rentals courtesy a new promotion with Apple. Orange Film To Go allows users to download and view one free movie per week via iTunes. According to the Orange Film To Go website, all you have to do is send the text FILMTOGO to 85060. From there, you’ll receive a special code to download your free film each Thursday through the Orange Film To Go website or through the Orange Film Club Facebook page. Rules are as follows: This week’s film is My Blueberry Nights. The Wrestler debuts later this week. Wouldn't if nice if Verizon or AT&T offered the same type of promotion in the U.S.? 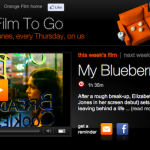 Orange UK Users Can Get iTunes Movies For Free

Orange UK Users Can Get iTunes Movies For Free
Nothing found :(
Try something else