You are using an outdated browser. Please upgrade your browser to improve your experience.
by Bryan M. Wolfe
August 30, 2011
Over two months after it decided to forgo Apple’s iTunes subscription plan, The Financial Times’ iPhone/iPod touch and iPad apps are no longer available in the App Store. Apple pulled them today, according to ipodnn. In June, we announced that the UK-based Times decided to implement its own HTML5-based web app, instead of giving into Apple’s demands for a 30 percent cut of its App Store revenues. Strangely, it took over 60 days before the apps were eliminated for sale in the App Store. At the time, a Times spokesman stated:

“We’ve seen strong demand for the FT web app since its launch. We have an ongoing marketing campaign encouraging users to migrate to the new platform and we’re confident we can maintain the momentum.”

The Financial Times web app is located at http://app.ft.com with standard subscriptions costing $4.99 per week. It is available on both the iPhone/iPod touch and iPad. 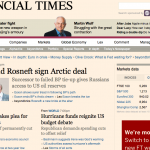 The Financial Times Apps Are No More

The Financial Times Apps Are No More
Nothing found :(
Try something else