You are using an outdated browser. Please upgrade your browser to improve your experience.
by Mike Lata
August 25, 2011
The third game in the Modern Combat series is coming this fall from Gameloft and looks quite stunning. Gameloft has also released the game's trailer. The Modern Combat games have often been compared to Activision's Call of Duty series and for good reason. Like the Call of Duty titles, they are first person shooters set in modern-day conflicts all over the world. Modern weapons and explosive firepower are their trademark. According to IGN the game will be hitting the App Store this fall and the full name of the title will be "Modern Combat 3: Fallen Nation." Also expect a new hero to take center stage this time around. The trailer shows some up close and personal action along with standard gun battles. A bridge even gets blown up. Check it out below: 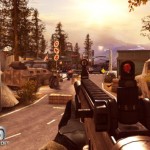 Trailer For Modern Combat 3 Released
Nothing found :(
Try something else