You are using an outdated browser. Please upgrade your browser to improve your experience.
by Alexander Vaughn
August 25, 2011
Steve's departure last night has prompted a lot of people  to tell us a bit about what it was like to work with Steve. As always, Steve is portrayed as an incredible leader, always involved in small details with that well known sense of perfection, but also with humor. Without a doubt, one of the best tales of the day comes, almost suprisingly, from Vic Gundotra, Google's current head of everything social. While working on better integrating Google into iOS, Gundotra collaborated directly with Apple on many things, including the presence of Google's own logo in the system. One day, Steve felt like that very logo wasn't as perfect as it could be:

One Sunday morning, January 6th, 2008 I was attending religious services when my cell phone vibrated. As discreetly as possible, I checked the phone and noticed that my phone said "Caller ID unknown". I choose to ignore. After services, as I was walking to my car with my family, I checked my cell phone messages. The message left was from Steve Jobs. "Vic, can you call me at home? I have something urgent to discuss" it said. Before I even reached my car, I called Steve Jobs back. I was responsible for all mobile applications at Google, and in that role, had regular dealings with Steve. It was one of the perks of the job. "Hey Steve - this is Vic", I said. "I'm sorry I didn't answer your call earlier. I was in religious services, and the caller ID said unknown, so I didn't pick up". Steve laughed. He said, "Vic, unless the Caller ID said 'GOD', you should never pick up during services". I laughed nervously. After all, while it was customary for Steve to call during the week upset about something, it was unusual for him to call me on Sunday and ask me to call his home. I wondered what was so important? "So Vic, we have an urgent issue, one that I need addressed right away. I've already assigned someone from my team to help you, and I hope you can fix this tomorrow" said Steve. "I've been looking at the Google logo on the iPhone and I'm not happy with the icon. The second O in Google doesn't have the right yellow gradient. It's just wrong and I'm going to have Greg fix it tomorrow. Is that okay with you?" Of course this was okay with me. A few minutes later on that Sunday I received an email from Steve with the subject "Icon Ambulance". The email directed me to work with Greg Christie to fix the icon. Since I was 11 years old and fell in love with an Apple II, I have dozens of stories to tell about Apple products. They have been a part of my life for decades. Even when I worked for 15 years for Bill Gates at Microsoft, I had a huge admiration for Steve and what Apple had produced. But in the end, when I think about leadership, passion and attention to detail, I think back to the call I received from Steve Jobs on a Sunday morning in January. It was a lesson I'll never forget. CEOs should care about details. Even shades of yellow. On a Sunday. To one of the greatest leaders I've ever met, my prayers and hopes are with you Steve. -Vic 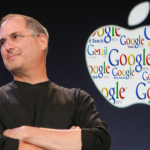 Vic Gundotra Gives Us A Glimpse Into What It Was Like To Work With Steve
Nothing found :(
Try something else