You are using an outdated browser. Please upgrade your browser to improve your experience.
by Bryan M. Wolfe
August 17, 2011
If you enjoy downloading free games from the App Store, you’re not alone. In fact, since the first half of 2011, 65 percent of the App Store revenues are coming from these apps, according to Flurry. How is this possible? We are in love with those in-app purchases that enhance our game play experience. In the past 12 months, the majority of revenues from the App Store have shifted siginifcantly from premium to freemium apps. As such, there have now been 57 million purchase transactions across a set of freemium iOS and Android games that averages over 2 million daily active users. Most surprisingly, most of these purchases are for those items that are depleted when used, so called consumables. These in-app purchases include upgrades, add-ons, virtual goods, and the like.

Examples include a set of grenades in a war game, or fertilizer that helps crops grow faster in a farming simulation.  Finally, we define personalization items as those that are durable but do not add any gameplay benefit (i.e., purely decorative).

This news isn’t that surprising. How often have you downloaded a premium app, only to find it wasn’t what you expected? In that case, you’ve spent money you really shouldn’t have for a game that eventually is deleted from your iDevice. With freemium apps, you get to try before you buy. Then, once you know you like the app, you’re more willing to make an in-app purchase to enhance the game. With the App Store expected to generate $1 billion in revenues in the U.S. alone, this news probably means more developers will begin using the freemium model. As Flurry summarizes:

Game developers should understand what consumers spend the majority of their money on.  As a business model, freemium games are here to stay.  While the consumer is indeed purchasing virtual items that are most often consumable, what’s most important to understand is the psychology behind these games.  In freemium games, consumers are experiencing compelling, immersive entertainment.  They feel gratified when they progress, accomplish goals, create a unique world, and in some cases, show off to their friends.  In exchange for this gratification, they are willing to spend real money, and lots of it. 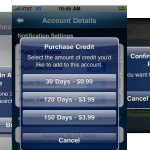 We Are In Love With Freemium Games

We Are In Love With Freemium Games
Nothing found :(
Try something else