You are using an outdated browser. Please upgrade your browser to improve your experience.
by Bryan M. Wolfe
August 10, 2011
Vudu, the movie and television streaming service owned by Wal-Mart, has arrived for the iPad in a move that could significantly change the movie-viewing landscape on iDevices. It was just last month when AppAdvice suggested a Vudu iPad app would be a terrific addition to the App Store. Well, Vudu is now available, but not as an app. Rather, it is available through Mobile Safari at Vudu.com. First available through televisions, computers, Blu-ray players, and the PS3, Vudu offers immediate streaming of Hollywood’s most recent hits on a pay-per-movie basis. Of course, by offering its service outside of the App Store, Vudu has bypassed Apple’s approval process and the company’s revenue sharing requirements. According to GigaOM, Vudu currently offers customers access to more than 20,000 titles for rental or purchase. They state:

By moving to the mobile web, Vudu can control the customer account across multiple devices, without having to worry about integrating with Apple’s login system. But most importantly, doing so lets Vudu and parent company Walmart avoid sharing revenues with Apple. Vudu GM Edward Lichty admitted that owning the customer relationship through the browser experience would be “economically favorable” to the streaming company.

Vudu arrives on iPad thanks to Apple’s HTTP Live Streaming (HLS) adaptive bit rate streaming. Although the service offers HD streaming via televisions, this isn’t the case here. Those streamed on the iPad are only available in standard format. With news that Apple is said to be readying its own movie-streaming service, iTunes Replay, this news could prove extremely interesting. In our opinion, this move could put added pressure on Apple to get this service to customers sooner rather than later. I’ve been a happy Vudu customer for a while now and strongly recommend trying out the service via the iPad. Best of all, new customers are able to stream one movie for free. For details, simply visit Vudu.com from your iDevice. 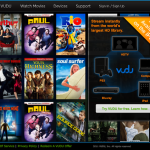 We Asked, Vudu Listened, As Movie Streaming Service Comes To iPad
Nothing found :(
Try something else