You are using an outdated browser. Please upgrade your browser to improve your experience.
by Mike Lata
September 1, 2011
If you enjoy action puzzlers you may be excited to know that Bulkypix will be releasing one for iOS soon. According to Appmodo, the game will be called Fruity Jelly and will be arriving on the App Store September 8. "In the game, the village of the Jellies has been destroyed, and the inhabitants are in peril because of the nefarious spiky king. Can anyone save the day? The very hungry blue jelly can! Join him as he attempts to eat fruit scattered throughout each maze — all the while avoiding getting devoured by numerous enemies," Appmodo describes the game's plot and gameplay. Despite the mention of it being similar to Pac-Man, by Appmodo, the screenshots make it seem like it will be a side-scrolling game. The similarity may refer to players having to collect items to pass levels (this time fruit instead of small dots). The game's controls will be tilt-based with players controlling the Jelly's movements by tilting their iDevice. Finger swipes will be used to rotate the mazes. Expect an arcade title with puzzle-platforming and various challenges to overcome. The game will also launch as a universal app and updates are already promised to be in the pipeline. No pricing has been revealed, but expect the title to launch at $0.99. 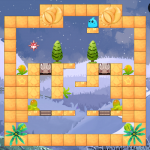