You are using an outdated browser. Please upgrade your browser to improve your experience.
by Bryan M. Wolfe
September 28, 2011
Amazon’s highly anticipated “iPad-killer,” the Kindle Fire, will be priced at $199 it was announced today. This price-point alone could soon change the face of the entire tablet market and affect Apple accordingly, says Bloomberg News. In addition, Amazon has now debuted its Kindle Fire page on its website. The Kindle Fire will have a 7-inch display and include Google’s Android software. More than simply a souped-up version of its existing Kindle e-book reader, the Fire will also include an app store and be fully integrated with Amazon’s Music service. In addition, the device offers Wi-Fi connectivity, though not 3G access, and comes with a 30-day free trial of Amazon Prime, the company’s $79-a-year membership service that includes streaming video and free two-day shipping. According to Bloomberg, Amazon Chief Executive Officer Jeff Bezos is “betting he can leverage Amazon’s dominance in e-commerce to pose a real challenge to Apple’s iPad.” Of course, we’ve been here before. Even as the Kindle Fire arrives, other companies have tried to bring down the iPad with zero success, including such big names such as Hewlett-Packard and Research In Motion. So what makes Amazon’s new product any different? For the first time, price will be a factor. While other tablets have been priced near or higher than the iPad (which starts at $499), the Fire’s $199 price tag could be a game changer. Coming from the world’s largest online retailer is also important. According to Brian Blair, an analyst at Wedge Partners Corp.:

Still, Apple’s dominance in the tablet marketplace isn’t going to suddenly evaporate overnight. For one, the company has built an app store second-to-none. As such, we don’t see a lot of iPad users suddenly switching to the lower-priced Kindle Fire. No, where Amazon’s new tablet could make inroads is with those customers that have yet to purchase a tablet of any kind. For those customers, price may be the most important factor in determining which first tablet to purchase. And, beginning today, Amazon will beat Apple in that department by $300. It will be very interesting to see how successful the Kindle Fire becomes. In particular, we can’t wait to see what Apple does in response. Could a cheaper iPad soon arrive? Stay tuned. Updated: ThisIsMyNext just published this Kindle Fire vs. Apple iPad comparison tool: 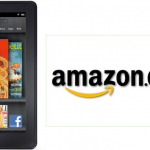 Amazon's Tablet Arrives For Just $199 (Updated)
Nothing found :(
Try something else