You are using an outdated browser. Please upgrade your browser to improve your experience.
by Bryan M. Wolfe
September 16, 2011
Long criticized for being too expensive, Apple’s line of Bumper cases for the iPhone 5 will likely be discontinued ahead of the iPhone 5 launch. This news, which isn't surprising seems to close the book on one of Apple's most controversial products, according to 9 To 5 Mac. Launched in June 2010 alongside the iPhone 4, the Bumpers are made of rubber and molded plastic and come in six colors. Almost from the start, however, consumers never warmed to the accessory with many feeling $29 for a piece of rubber was excessive. The Bumpers became more famous, however, for being Apple’s solution to the so-called “antennagate” controversy that rocked the company in the summer of 2010. According to Apple, using a Bumper with the iPhone 4 would eliminate antenna issues some customers had experienced. To prove their point, through its Case Program, Apple offered iPhone 4 owners Bumpers for free for a limited time. Soon, however, Apple restored the Bumper’s price tag and universal models were introduced along with the Verizon iPhone 4 in early 2011. According to 9 To 5 Mac:

As Apple transitions its iPhone line to the iPhone 5, some may not find Apple’s discontinuation of an iPhone 4 accessory surprising. But, there are the countless rumors pointing to Apple retaining the iPhone 4 design for their fifth-generation iPhone. With Apple apparently set to discontinue the Bumper, the next iPhone may require an updated Bumper or may even feature an all new design. Of course, there is also the possibility that Apple has simply decided to discontinue the Bumper but still retain the iPhone 4 design. After all, an 8GB iPhone 4 has been rumored.

We wouldn’t be surprised if Apple retires its Bumper line, but then releases something slightly different for a revised iPhone 4 and/or the iPhone 5. Regardless, we’re pretty sure that in the process the name “Bumper” will be retired. Meanwhile, the cases remain today in the Apple Store. 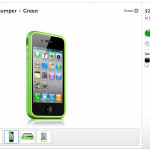 Apple Set To Discontinue Its Controversial Line Of Bumper Cases

Apple Set To Discontinue Its Controversial Line Of Bumper Cases
Nothing found :(
Try something else