You are using an outdated browser. Please upgrade your browser to improve your experience.
by Bryan M. Wolfe
September 3, 2011
Last January, we reported that some sort of Find My Friends feature was discovered in the iOS 4.3 beta. Of course, once released to the public, the iOS contained no such feature. Now, similar code is being found, but this time within HTML code from the recently launched iCloud.com website, according to 9 To 5 Mac. The code, which we’ve included here, seems to point to an upcoming social networking service. They state:

From what we can glean from this HTML code, Apple’s Find my Friends service was definitely in development, and it takes some terminology cues from Twitter, which happens to also be fully integrated into the upcoming iOS 5 release. The service may even be similar to a recent patent filing by Apple that is shown above. According to the code, users will be able to select other users to “follow.” Once a user “follows” another user, they will gain access to information about the user besides their location. Apple would presumably create profiles – maybe similar to Game Center – based on Apple IDs. Because the terminology is so similar to Twitter’s, perhaps Apple’s Find my Friends integrates with a Twitter login.

Sounds like some interesting stuff, don’t you think? We’re not sure whether Find My Friend is actually a new service or some sort of enhanced Twitter integration in iOS 5 or iCloud. One might recall that Twitter is tightly integrated into iOS 5. It allows iDevice owners to tweet directly from Safari, Photos, Camera, YouTube, or Maps. We’ll keep you updated; hopefully, Apple will be releasing iOS 5 very soon. 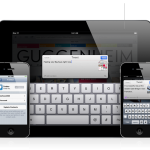 Find My Friends - New iCloud Feature Or More Twitter Integration?
Nothing found :(
Try something else