You are using an outdated browser. Please upgrade your browser to improve your experience.
by Bryan M. Wolfe
September 20, 2011
Google has unwrapped its new NFC-based payment system, Google Wallet, placing it first on Sprint Android smartphones. This news, which comes just weeks before Apple's likely launch of the iPhone 5, was first reported by Apple Insider. First announced in May, Google Wallet lets users use their device as a payment method at stores using the new NFC technology. Short for near field communication, NFC lets one or more devices interact with each other from short distances. The new Google Wallet service is available now to Sprint Nexus S 4G users through an over-the-air firmware update. It is being supported through a partnership with Citi and Mastercard. In the future, Visa, Discover, and American Express are expected to sign onto the service as well. The launch of Google’s own NFC-based payment system comes at a time many are wondering whether Apple will offer a similar feature on the still-unannounced iPhone 5. According to Apple Insider, “Apple’s interest in NFC technology and e-payment systems has been evidenced by several patent applications, job postings and even claims made by Deutsche Telekom execs.” Says The New York Times’ Nick Bilton:

““When Apple does introduce a mobile-payment-ready iPhone, the company will immediately have an advantage over its competitors, including Google and Microsoft, which are trying to push payments on mobile devices too. One person familiar with Apple’s plans said the phone’s payment information would be tied to customers’ iTunes accounts, which would make it simple for customers to set up a payment account on the iPhone by simply logging into iTunes," he added.”

Take a look at this Google Wallet demo brought to us by the folks at ThisIsMyNext: Google’s decision to release Google Wallet today means the NFC ball (no pun intended) is now in Apple’s court. We’ll keep you updated. 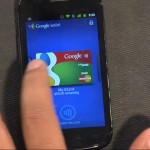 Google Launches NFC-Based Payment System On Android-Based Smartphones
Nothing found :(
Try something else