You are using an outdated browser. Please upgrade your browser to improve your experience.
by Susan Megrund
September 9, 2011
Business Insider released a great story about a popular developer who needed an iPad 2 to write code, prior to its release. We are not sure who the developer is, however, it must be one that is very influential in order to receive the treatment they did. Since all this happened over a year ago, the developer now was able to share their story with Business Insider. It goes like this:

I was probably the sixth person to get an iPad. We got two of them flown out. The criteria was that we had to have a room with no windows. They changed the locks on the door. Three developers and I were the only people allowed to go in the room. Apple needed the names and social security numbers of the people who had access. Apple needed to be able to drill a hole in the desk and chain the devices to (sic) desk. They used those bicycle cables. They had these custom frames built around them so we couldn't even tell what the iPads looked like. We could plug into them so we could code to them and we could touch the screen and play with that, but we couldn't see the form factor. Then they took pictures of the wood grain. If any pictures leaked out, they could trace it back to which desk they came from. I wasn't allowed to tell our CEO. I wasn't allowed to tell anybody anything about what we were doing. I couldn't even tell my wife. She was like, "You're going to get fired if this doesn't work." I hadn't thought about that but she was probably right. Luckily, it worked out very well.

It is absolutely amazing that Apple goes to these extreme measures to protect their product. Why wouldn't some type of strict non-disclosure agreement be enough? Since the business of both companies is at stake, it seems these highly successful developers would not share any of Apple's secrets. I am willing to venture a guess that just about any Apple employee who works in these tightly secured divisions could get a job with the Secret Service or the CIA. I think these Apple employees may even do a better job. Oh, if you like the Top Secret iPad bags in the picture at the top, you can purchase them inexpensively at Etsy! 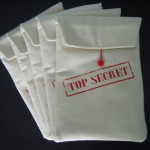 How Does Apple Keep Secrets? Here’s One Story

How Does Apple Keep Secrets? Here’s One Story
Nothing found :(
Try something else