You are using an outdated browser. Please upgrade your browser to improve your experience.
by Bryan M. Wolfe
September 14, 2011
Today, Microsoft offered Build 2011 attendees a hands-on demonstration of its upcoming Windows 8 OS that is expected to launch in 2012. As a review, this version of Windows will eventually run on both desktops and upcoming tablets that will compete against Apple’s iPad. While we haven’t personally gotten our hands on Windows 8, we’ve heard enough about it to know Apple could learn a few things from the team in Redmond, Washington. Here are five things Apple could learn from Windows 8. Gesturing First expected with iOS 4.3, Apple’s gesturing feature is finally set to arrive for the masses with iOS 5. When it does, however, it will not compare favorable with the gesturing features coming from with Windows 8. Apple’s gesturing tool is limited to three actions: Pinch to the Home Screen, Swipe up to reveal the multitasking bar, and Swipe left or right between apps. Windows 8, on the other hand, includes these largely novel actions (in a Windows environment, obviously) and a lot more. For example, swiping right brings up something called “Charms.” These are five icons of sorts that let you jump quickly to the Start screen, settings, and other processes. According to Gizmodo, “quite simply, its the best gesture interface out there right now.” Tiles In, Apps Out Microsoft believes app icons are old school and instead uses tiles for its Windows 8 tablet product, called Metro. Instead of a Start menu with small icons, Windows 8 has tiles, used both for launching applications and to display information. Run a Metro app and it fills the entire screen. Microsoft calls this the immersive user interface. We’re not saying Apple should replace its icon schema. However, it could certainly be improved. For one, the only way to customize an iDevice’s home screen is by grouping apps into folders. This is fine, but once you have a lot of apps installed on your iPhone or iPad, finding the right one becomes a big hassle even with the Search function. Perhaps Apple would be wise to create a mechanism where the most important apps are somehow elevated to a more important part of the home screen. For example, a larger folder or one in a different color, etc. One OS Microsoft plans on offering one version of Windows 8 across all platforms. This is a wise decision since consumers will no longer have to decide what version (Home, Professional, Tablet) they will need for their needs. We’ve heard rumors that Apple will eventually merge OS X and iOS and we believe this would be the correct path for them to take. In doing so, customers could learn one OS and use it on whatever Apple product they own, with slight variances offered according to device. Luckily, we’ve already seen this somewhat with the release of OS X Lion, which includes a LaunchPad that looks a lot like an iOS home screen. Separate Logins Windows 8 lets consumers assign functionality by creating separate logins. Apple should do the same with its iPad. Quite frankly, there are apps on an iDevice that shouldn’t be viewed by others, whether it is a company spreadsheet in Numbers, or pictures of half-naked girls in the Maxim app. By adding separate logins, Apple could separate functionality by user. Side-by-Side apps Finally, Windows 8 lets tablet customers use two apps at the same time using a process Microsoft calls snap state. This feature alone could be a deal-break for many would-be tablet buyers. The iPad is good at many things, but multi-tasking isn’t one of them. Wouldn’t it be nice to use two apps at the same time? Summary We’ll hear a lot more about Windows 8 in the coming months and keep you informed on its pros and cons, and how it relates to iOS. Our first look however, suggests Microsoft probably has a nice product on its hands with some tools a step or two ahead of what Apple is currently offering. What are your thoughts? Are you excited about Windows 8 and how it relates to tablets? Would you buy such a device? Let us know by using the comments below. 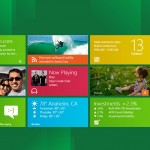 Microsoft Shows Off Windows 8 - With Some Interesting Ideas

Microsoft Shows Off Windows 8 - With Some Interesting Ideas
Nothing found :(
Try something else