You are using an outdated browser. Please upgrade your browser to improve your experience.
by Bryan M. Wolfe
September 7, 2011
Although the iPhone 5 remains shrouded in mystery, a new leak suggests the next-generation iDevice will come with a 8-megapixel camera. Apparently, an Apple engineer posted a photo on Flickr taken with the new iPhone, according to news first reported by Pocketnow.com. The photo, which we’ve included here, was taken on July 22 by Apple employee Anton D’Auria. While D’Auria claims the photo (nice lunch) was taken with an iPhone 4, that doesn’t appear to be the case. Rather, a careful review of the photo confirms that the original image checked in at nearly 8 megapixels prior to cropping. Of course, this isn’t possible with the iPhone 4, which maxes out at 5-megapixels. According to the report:

This (very attractive) photo claims to have been taken by an iPhone 4, but the rest of its EXIF data tells a different story: although the image has been cropped to 2235x2291 (5.12 megapixels), the original picture was a much larger 3264x2448 -- or just shy of eight megapixels. What's more, the lens was recorded as a 4.3mm f/2.4, which is closer to that of a point-and-shoot than the iPhone 4's actual 3.85mm f/2.8. (Remember that the upcoming HTC Runnymede is said to have an aperture of f/2.2.)

To add to this story, know that the photo was taken from Apple’s Infinite Loop campus in Cupertino, California, according to This Is My Next. Of course, perhaps D’Auria took this photo with another camera entirely and just marked it wrong. Yeah, right. By the way, according to D’Auria, the meal pictured includes uni (sea urchin), hirame (wild halibut), sake (wild Alaskan salmon), and an avocado roll 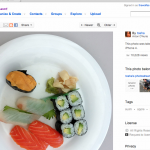 Oops! Apple Engineer Confirms Next iPhone Has 8-Megapixel Camera
Nothing found :(
Try something else