You are using an outdated browser. Please upgrade your browser to improve your experience.
by Mike Lata
September 6, 2011
King of Dragon Pass is a strategy and simulation game with some RPG elements that was released for the PC and Mac about a decade ago. Pocket Gamer reports that the critically acclaimed game is being ported to iOS and will be arriving in a matter of days. It is known as a title that is more of an interactive text adventure than a modern game. It has no moving graphics and instead relies on menu selections, but it does have resource management as a key gameplay element. "The game, which combines interactive stories and resource management, is set in the fictional kingdom of Glorantha, which RuneQuest and HeroQuest fans should already be familiar with," according to Pocket Gamer. King of Dragon Pass will have a reworked user interface, though, according to Pocket Gamer. Also, aspects of the story that weren't popular with fans will be dropped in favor of new storyline elements. If you enjoy stories from medieval Europe with some fantasy thrown in, you should find the game a blast when it hits the App Store. The release date will be September 8, and price has been set at $9.99. No word on device compatibility, but at such a price tag we hope it will be universal. 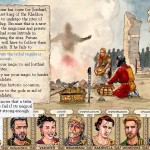 Simulation-Stratgy Game, King Of Dragon Pass, Gets An iOS Port

Simulation-Stratgy Game, King Of Dragon Pass, Gets An iOS Port
Nothing found :(
Try something else