You are using an outdated browser. Please upgrade your browser to improve your experience.
by Bryan M. Wolfe
September 13, 2011
Apple’s new plant in Jundiai, Brazil is open and already producing iPad 2s, according to news first reported by the Brazilian website, UOL. The new plant, a joint venture between the Brazilian government and Foxconn, appears to be coming online ahead of schedule. In May, we reported that officials hoped the new facility would be operational by mid-2012. By adding Brazil to its iPad supply chain, Apple could improve shipping times and be less affected by catastrophic events like this year's earthquake in Japan. Today’s news comes from comments made by the Brazilian Minister of Science and Technology, Aolizio Mercadante, speaking at a hearing with his country’s Commission of Economic Affairs, according to MacStories. The iPad 2s being produced now in Brazil should be available for purchase in December. 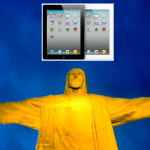 The iPad 2: Designed In California, Assembled In Brazil

The iPad 2: Designed In California, Assembled In Brazil
Nothing found :(
Try something else